How to Move Photos from Dropbox to Google Photos in 2022

Google Photos is a photo-sharing and saving cloud storage service that offers users 15GB of free storage space to save videos, screenshots as well as images. And Dropbox is a collaborative cloud drive that allows users to store and manage different kinds of files such as documents, PDF files, and so on. These two cloud services could bring many conveniences to users since users can access their data from any device, anywhere, and anytime.

Why Move Photos from Dropbox to Google Photos?

Download and upload? Is it the first solution you consider when talking about how to migrate pictures from Dropbox to Google Photos? Yes, it’s the commonest and easiest way to accomplish the target. However, imagine you have a large number of photos to transfer.

To improve the transfer process and ease your work, it’s recommended to use specialized third-party services that aims to help users migrate data between cloud services directly without downloading and uploading. For example, users are able to transfer files from one OneDrive account to another, migrate Dropbox to Google Drive, and so on.

How to Move Photos from Dropbox to Google Photos Easily

When it comes to moving data between cloud drives, MultCloud is the first choice for most users since it is one of the pioneers in the cloud sync and transfer field. It supports over 30 practical cloud drives, such as Google Drive, Dropbox, Google Photos, Flickr, MEGA, OneDrive, Amazon S3, and more.

Now, learn the quickest and easiest way to move photos from Dropbox to Google Photos via MultCloud: 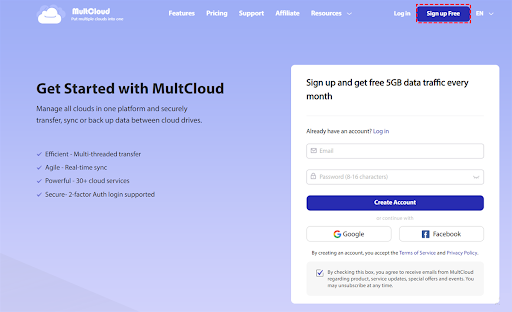 Step 2: Create an account on MultCloud for free. Alternatively, signing in with your Facebook or Google account is feasible.Go to Add Cloud on the left sidebar and add Dropbox and Google Photos by clicking on their icons and following the instruction on your screen.

Want to select certain photos from Dropbox to move? Then you can press the Options button and go to Filter. This feature allows you to exclude files with certain extensions, such as .jpg, .png, etc. Also, you can press the Schedule tab to set up automatic transfer tasks.

Likewise, you are allowed to move files from Dropbox to Google Drive via MultCloud. All you need to change is the target cloud. And then MultCloud can accomplish it immediately.

That’s all about the quickest way to move photos from Dropbox to Google Photos without downloading. In a word, MultCloud is a wonderful cloud transfer tool when users want to migrate data between cloud drives.