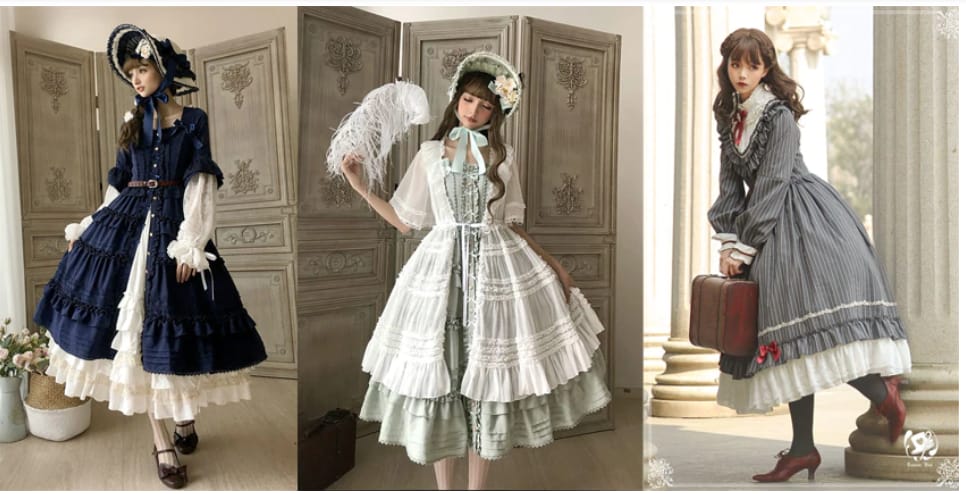 In comparison with other styles, classic Lolita is considered more mature and historically inspired. There is less emphasis on cuteness in this style. Several Classic dresses could even pass for fancy “event” dresses, as they tend to look more toned-down than other styles. Can’t imagine it? Check out here to find these fantastic classic lolita dresses on lolitainside.com, and you will see.  Lolita style can sometimes straddle the line between Sweet and Gothic.

Classic Lolita dresses are characterized by muted colors like dusty pastels and jewel tones. In classic Lolita clothing, cream/off-white is more of a neutral color than stark white. Solid colors and floral prints are common choices, but you can also find fancier or cute ones.

Lolita skirts typically have an “A-Line” shape instead of bell-shaped skirts. Headwear can include round or thin rectangle headdresses, head bows (smaller bows tend to be more popular than huge bows), hair corsages/flowers, or elegant hats.

Lolita classics tend to have more streamlined A-line skirts, and the skirts tend to be longer than Lolita sweets. It’s popular to wear tea-length skirts (skirts that reach your calf), and you can make a knee-length dress tea length by adding an underskirt (a plain slip-like skirt with a lace ruffle at the bottom).

The classic Lolita pieces tend to have heirloom details such as pintucks, ruffles, and other sewn decorations.

Classic pieces consist of solid colors, florals, stripes, antiques, animals, architecture, and prints inspired by old master paintings and motifs such as crowns, fleurs de lis, crests, and antiques. Prints of animals and fruits in Classic Lolita often have a realistic or antique look to them instead of the more cartoon-like or fantasy-like prints of Sweet Lolita.

Flat shoes are uncommon in Classic, unlike most other Lolita styles. Besides high-heeled shoes with straps, there are also many boots in the style of Victorian times.

Usually, the hair is kept in various blonde, brown, and black shades to maintain its natural appearance. Although the style can essentially be anything, it usually does not go to extremes. Some people curl their hair, but the curls aren’t as extreme as the old-fashioned sausage curls. Though it is uncommon, you can also wear wig to enhance the aesthetic. It is preferred to use natural-looking makeup to give the impression of mature elegance.

Lolita outfits are known as “coords” or “coordinates” in the Lolita language. A dress or skirt will be part of every outfit to achieve the proper lolita silhouette. As your dress is made with a full skirt to accommodate a petticoat, it is made with a full skirt. Depending on whether the dress is JSK or OP, it is categorized as part of the Lilita line. Jumperskirts, generally worn over the top, are sleeveless dresses, and OPs, which are one-piece dresses, are usually worn without tops. You can choose your outfit on Lolitainside among a variety of dresses.